A Case Study on 16s rRNA Sequencing of Fuel

A snapshot from global scenario

Microbial contamination of hydrocarbon fuel is a severe problem that can lead to costly and dangerous operational problems in fuel storage and engine systems [1]. Bacteria and fungi can cause deterioration of fuels through a number of mechanisms, including an accumulation of biomass, degradation of protective additives, and production of corrosive metabolic byproducts [2].

Identification of hydrocarbon fuel contaminating organisms depends heavily on culture based testing and traditional phenotypic identification [3,4]. Culture based methods may often lead to underestimation of contaminant diversity and misidentification of the constituent species [1]. The diagnosis may often be hindered by uncultivable or fastidious contaminants and usually requires about 7 days for the identification of the contaminants that are cultivable. In addition, efficient classification of contaminating taxa, particularly those which serve as early indicators of serious biofouling issues such as microbially influenced corrosion caused by sulfate-reducing bacteria (SRBs) [5,6] or fouling of engine components caused by biofilm-producing bacteria may prompt early intervention [1]. 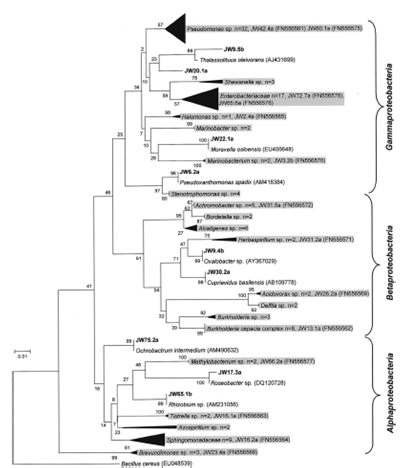 Direct application of 16s rRNA gene sequencing in hydrocarbon fuel contamination testing has massively changed the field of microbial ecology, and has a great potential to provide new insights into the microbiology of fuel contamination [1]. Massively parallel next generation sequencing of 16s rRNA gene has enabled to assess the diversity the whole spectrum of microbes, including the uncultivable taxa at a deeper level.

16s rRNA sequencing of bacteria is the current most successful method for bacterial identification. It is a very rapid technique with only 48 hours of operational time from start to end, and the bacteria can be characterized without the need for clone library generation. The technique can discriminate between closely related isolates, and can detect their relative abundances with high accuracy. These advantages allow early detection of microbial influenced biofouling issues, which permits the issues to be addressed faster, when they are still underway.

Although disregarded, there prevails a timely need of establishing a system for microbial quality assessment of hydrocarbon fuel used within the country. According to a World Bank report published in 2010, the road sector gasoline fuel consumption (kt of oil equivalent) in Sri Lanka was 452 in 2009 [7] and the crude oil consumption reached up to 97,000 barrels per day in 2011[8]. Having a vast array of logistics and transportation agencies being operated in the country, Sri Lanka requires a rapid, accurate and scalable crude oil quality control system in microbiological aspects. Biofouling of fuel may lead to serious, costly and dangerous issues related to operation failures of engines, low efficiency due to incomplete combustion and environmental pollution.

To address the gap, Credence Genomics has introduced a rapid, accurate and highly scalable microbial testing technique of 16s rRNA Sequencing, which is a leading edge technology adopted as favorite in laboratories worldwide, facilitating a newer era of laboratory testing.