Sri Lanka confronts a variety of water and wastewater issues and water related health hazards [1]. These problems arise primarily due to the increasing level of qualitative and quantitative depletion of water resources owing to over- utilization and continuous discharge of wastewater. More than 90% of sewerage in the developing world is discharged directly into rivers, lakes, and coastal waters without any treatment. Large cities such as Colombo, Galle, Jaffna and Kandy have severe problems disposal of sewerage, industrial effluents and industrial and of domestic solid waste, as they generate large quantities but have no facilities for their treatment and proper disposal [2]. UNEP (2001) estimated that each day in the Colombo Metropolitan Region, 428 MT of sewerage is released into the ground through septic tanks and pit latrines and 138 MT of sewerage is released into waterways [3]. In central province Kandy suffers from serious problems of wastewater disposal, which majorly contributes to the pollution of Mahaweli river. No proper system is been established for wastewater disposal in Kandy, and about 80% of used water is released as wastewater [2]. In addition, Pussalla Oya catchment was the main source area for the “Hepatitis A” outbreak recorded in Gampola district in May 2007 [4]

To reduce the degradation of water quality and ensure a healthy environment, Sewage Treatment Plants have been constructed in many areas, especially in rapidly urbanizing cities around the country. However water treatment efficacy has been a major concern [2] Different authorities concerning public health have set up guidelines on maximum allowable microbial, physical and chemical concentrations in treated sewage water. There are currently several approaches in case of establishing microbiological quality of treated water, based on conventional testing methods. Routine culture based testing is performed to identify bacterial pathogens; Vibro cholera, Salmonella typhi, other Salmonella spp, Shigella spp., Ca mphylobacter, Proteus spp., Coiform spp.,E.coi 0157, Clostridium spp., Pseudomonas spp., Tuberclebacilli, Leptospira and Yersinia enterocolitica that are the main causative agents of human gastro intestinal diseases[5]. Culture based techniques always depend upon index organisms and indicator parameter testing which usually takes about a week. Some fastidious bacteria would show delayed or unsatisfactory growth patterns that usually obstruct the identification process, and anaerobic bacterial groups can be specifically hard to identify. In addition to these, culturing techniques do not facilitate intragenic variation detection in a sample containing a mixed population. Thus, an efficient procedure for treated sewage testing is a timely need as poorly treated wastewater, when used for agricultural, recreational, and other purposes can act as the key for many contagious diseases. 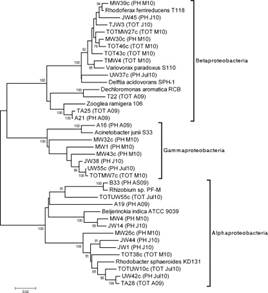 16s rRNA gene sequencing is performed worldwide as a rapid and reliable technique for the determination of the efficiency of waste water treatment. This is a very cost-effective method, large scale method for assessing microbial composition, their relative abundances and intragenic variations. In addition, it helps to prevail over major drawbacks of culture based techniques in terms of culture failures, unculturable organisms, and time as 16s rRNA sequencing is a culture independent method. The total profile of microorganisms in the sample can be identified within just 24 hours of runtime, thus enabling a remarkable increase the throughput. This can be used as the best solution to establish high standards of water treatment processes to ensure better safety and microbiological quality of treated water.