Leptospirosis, commonly known as Rat fever is an infectious disease caused by a particular type of Bacteria called a Spirochete of the genus Leptospira that affects humans and a wide range of animals,including mammals, birds, amphibians and reptiles.

Over the years, it has been emerging as a major public health threat in Sri Lanka and the country reported the worst ever Leptospirosis outbreak in 2008 in its history with more than 7000 reported cases1. The outbreak caused a total of 204 deaths with a case fatality rate of 2.9%2. In 2009, 4,980 cases and 145 deaths were reported and the outbreak persisted in 2010 with 4,553cases and 121 deaths7.

To implement efficient diagnosis and prevention of the disease, a combination of laboratory confirmed conventional tests were employed such as, Microscopic Agglutination Test, culture based identification of pathogenic Leptospira species from a normally sterile site, detection of Leptospira species in clinical samples by histological, histochemical or immuno-staining technique, and pathogenic Leptospira species DNA detected by PCR3,but their longer turnaround times hampered rapid identification of the disease which was essential for saving the lives of people who were affected. 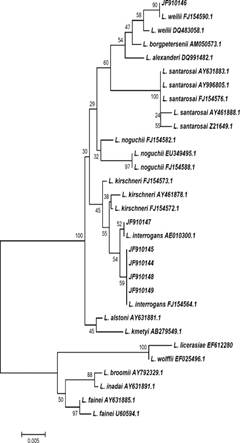 Drawbacks of conventional methods were a huge challenge to overcome in establishing effective disease diagnosis and control, and implementing a rapid diagnosis technique was critical since the disease was life threatening to those who were affected. Thus, understanding the timely need a group of researchers7 performed 16s ribosomal RNA gene sequencing for disease identification.

16s ribosomal RNA gene sequencing is a very rapid, culture independent method, to identify any bacteria and differentiate between intragenic variations with a high level of accuracy. In this case, the researchers could successfully identify the different serotypes7 of the causal organism simultaneously eliminating the need of serological tests.

This technique can be an extremely powerful tool during an outbreak, accounting to its ability to generate massively parallel data only in 48 hours of run time, maintaining the same accuracy throughout.

As the only service provider with access to this life-saving technology, we are determined enhance and upgrade health care facilities in Sri Lanka by providing our stakeholders with the most innovative methods of microbial sequencing.