A case study on identification of soil microbial diversity

Soil is the vital source of a variety of microorganisms, depending on the geographical variations in terms of moisture, minerals, carbon sources, temperature. Soil has been a versatile storage facility and has been supplying the necessary microbial flora through their revival as per the needs of complex molecules degradation leading to the supply of vital nutrients to plants and animals. Therefore, soil microorganisms play a major role in harnessing the energy and revitalizing the food chain in its cycle . They also play pivotal roles in various other biogeochemical cycles and are responsible for the cycling of organic compounds. Soil microorganisms also influence above-ground ecosystems by contributing to plant nutrition, plant health, soil structure and soil fertility [1].

Knowledge on soil microbial diversity is very limited due to the inability to study the soil microorganisms. It is estimated that there are 4000 different bacterial ‘’genomic units’’ in 1 gram of soil, based on DNA- DNA re association [2]. It has also been estimated that about 5,000 bacterial species have been described [3]. Only 1% of the total soil bacterial population can be cultured under current standard laboratory practices [1]. An estimated 1,500,000 species of fungi exist in the world [5]. But unlike bacteria, many fungi cannot be cultured by standard laboratory methods. Although molecular techniques have been applied to study soil bacterial communities, very little research has been undertaken for soil fungi [1].

Many anthropological activities such as city development, agriculture, environmental pollution, use of pesticides/ fertilizers, deforestation etc. can potentially influence the soil microbiology function. Thus, it is of great importance to investigate in detail to determine how anthropological activities change soil microorganisms and ecosystem functions governed by them.

While studying microbial diversity in soil, many limitations arise due to limitations of conventional methodologies and lack of knowledge on phylogenetic taxa. Many species of bacterial and fungal species elude culturing under conventional methods. Only very limited information exist on spatial and temporal variations of microorganisms in soil. Taxonomic ambiguity of microbes is another problem associated with studying microbial diversity [1]. Although traditional microbiological methods such as plating of microorganisms are performed, it cannot detect the unculturable and fastidious microorganisms, which constitute a major proportion of soil microbial community. Routine culturing of microorganisms would require a minimum of 7 day turnaround time and the technique is more biased towards fast growing organisms or the fungal species that produces large quantities of spores. Other techniques such as community level physiological profiling based on sole carbon utilization patterns or Fatty acid methyl esterase analyses (FAME) carry certain disadvantages related to test sensitivity [1]. 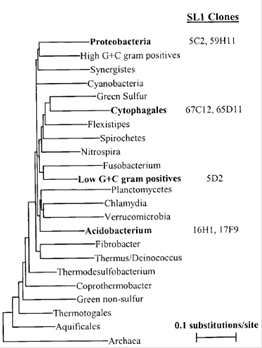 A more detailed, rapid and accurate sequencing based methods of 16s rRNA gene (bacteria) and ITS region (fungi) are introduced to aid advance studies of soil microbiology and to utilize soil microbial communities to enhance ecosystem functions. Being a culture- independent technique, it eliminates the whole cascade of drawbacks caused by uncultivable species of bacteria and fungi. In addition, this approach does not require cloning of amplified fragments which saves considerable amount of time spent for identification.

The technique is employs semiconductor based massively parallel next- generation sequencing, thus resulting in increased sensitivity, accuracy and throughput. It can also discriminate among closely related species of microorganisms, allowing highly specific identification of bacteria and fungi, independent of their culture characteristics and metabolic activities. Runtime of the test is only 48 hours, thus it permits fast identification of bacteria and fungi.

16s rRNA sequencing of bacteria and ITS region sequencing of fungi can be comprehensively determine the micro flora in soil and their effect on soil fertility. Since soil fertility and its microbial habitat directly contributes to agricultural crop yield and plant health, tracking the changes of micro flora overtime is extremely beneficial in making agricultural management decisions and crop management. Thus, maintaining a healthy soil can be profitable in unexpected ways. This novel technology can also serve soil research purposes, which will help making many discoveries that were previously impeded by limitation of techniques.