A case study on food poisoning in Sri Lanka

Food borne diseases have become a common issue in Sri Lanka, with outbreaks, hospital admissions and deaths due to food poisoning being reported frequently. The newspapers reported the death of a child upon consumption of sausage contaminated with Shigella spp [1]. In May 2013, a group of students of Ruhuna University were hospitalized due to food poisoning [2]. Another incident was reported in March 2013, nearly 25 were admitted to the hospital as they developed adverse reactions to the food they had consumed [3]. Food poisoning is becoming a public health concern with alarming amounts of people being victimized for repeated outbreaks.

Microbiological assessment for quality and safety of food and beverages traditionally relies upon the enumeration and specific detection of pathogenic organisms. Culturing of microorganisms, isolation of colonies based on morphological features and subjecting them to biochemical, physiological and serological tests are carried out routinely as verified methods of identification tests. Although these methods can provide both quantitative and qualitative information on the information on microorganisms present in food [5], they are generally slow and require a minimum of 7 day period to provide results; and uses a large amount of material and labour. The accuracy of the result may depend on operator expertise. Some organisms can be unculturable, fastidious or spore forming thus hindering the identification process. Certain microbiology laboratories also use modified conventional methods, membrane filtration techniques and immunological assays that can be very expensive in testing of large amounts of samples.

Therefore, food and beverage manufacturers seek for sensitive, accurate and rapid assays that can screen large number of samples in order to increase the process efficiency. Implementing an innovative technique that can aid such measurements will help to increase the manufacture throughput while an increased number of processed food and beverage batches get screened on routine basis; resulting in higher profits, safer consumer products and good customer feedbacks. 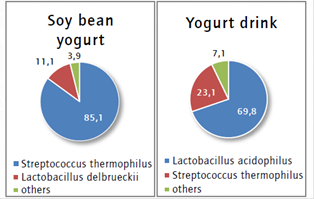 Fig– The most abundant species in soy bean yogurt and the yogurt drink as discovered by 16s rRNA gene sequencing. Numbers indicate the frequencies in percent. [6]

16s rRNA gene sequencing of bacteria and ITS region sequencing of fungi is such an innovative approach that generates results in 48 hours of runtime. The rapidity helps in the increase of process efficiency, increasing the number of samples being subjected to testing each turn and the technique can be used for immediate identification of pathogens during an outbreak. Based on Next Generation Technology it has a dramatically increased throughput and permits parallel testing upto 200 samples per run. Test organisms can be identified up to species level with their relative abundances. High sensitivity of the technique allows identification of intragenic variations among closely related organisms. Therefore, presence of wanted microorganisms confirmed and the presence of pathogens can be ruled out or identification of newer pathogenic strains can be performed with elevated confidence levels. Being a culture independent technique, sequencing of 16s rRNA gene (bacteria) and ITS region (fungi) eliminates the need of culturing of organisms and problems that are often encountered with unculturable and fastidious organisms. Therefore, the technique is used in many laboratories worldwide to ensure the microbial quality of their products [6].

With 16s rRNA gene sequencing of bacteria and ITS region sequencing of fungi coming to the limelight, food and beverage manufacturers can look forward to an era of absolute microbial quality, higher productivity, lesser customer complaints and better customer satisfaction.