Ventilator associated pneumonia is the most common nosocomial infection that occurs among critically ill patients receiving mechanical ventilation for more than 48 hours in the intensive care units. It accounts for high rates of morality, increased health care costs and prolonged hospital stay of patients who acquire the disease. [1] The infection results from microbial invasion of the normally sterile lower respiratory tract and lung parenchyma caused by a defect in host defenses, challenge by a particularly virulent microorganism, or an overwhelming inoculum. [2] Hospital-acquired pneumonia which develops 48 hours or longer after hospital admission is reported to be the second most common nosocomial infection, and is able to increase a patient’s hospital stay by approximately 7-9 days while increasing the hospital costs by an average of $40,000 per patient.[3,4] For the year 2011, National Healthcare Safety Network of the US reported more than 3,525 VAPs and the incidence for various types of hospital units ranged from 0.0-4.9 per 1,000 ventilator days.[5]

According to the International Nosocomial Infection Control Consortium (INICC) report which summarizes infection control data of 36 countries through a period of 4 years (2004-2009) the overall rate of ventilator associated pneumonia in developing countries was recorded as 15.8 per 1000 ventilator days. This amount is significantly higher than the VAP rate of the US, which was recorded as 3.3 per 1000 ventilator days, despite the fact that the use of devices in the developing countries’ ICUs was remarkably similar to that reported in US ICUs in the CDC’s NHSN.[6] A study conducted on the patients admitted to the Intensive Care Unit of Teaching Hospital, Karapitiya for over a period of 3 months showed a VAP incidence rate of 21.9%. 29.4% of ventilator supported patients developed a lower respiratory tract infection. [7]

As discussed above, Ventilator associated pneumonia burdens the healthcare systems due to high morbidity, morality, increased hospital stay and increased use of antibiotics. Although solid evidence indicates that this disease is preventable and that hospitals can decrease the rates of VAP, the struggle to develop an appropriate diagnostic strategy continues imposing multiple implications for subsequent antimicrobial therapy. The fundamental obstacle of diagnosis of VAP is the lack of a uniform gold standard. In addition, the absence of clearly established diagnostic criteria frustrates efforts to evaluate and compare across studies that focus on VAP. [8] 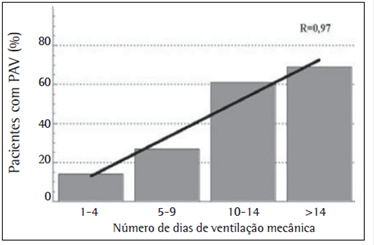 Establishing a diagnosis of VAP, based on pathology or histology plus culture of the lung tissue, has a considerable degree of uncertainty, however, it is considered the best available gold standard. Moreover, many patients die after some days of antibiotic administration, which may alter results of bacteriologic analysis. [9] Due to the incapability of identification of causative organism of the disease, broad spectrum antibiotics (empiric therapy) are recommended when VAP is first diagnosed and the treatment is continued until the particular bacterium and its sensitivities are determined. Empiric antibiotics should take into account both the risk factors a particular individual has for resistant bacteria as well as the local prevalence of resistant microorganisms. If a person has previously had episodes of pneumonia, information may be available about prior causative bacteria. The choice of initial therapy is therefore entirely dependent on local knowledge and will vary from hospital to hospital. [10]

Although various procedures are available for clinical diagnosis of VAP, none of the tests are entirely reliable. CPIS, or the clinical pulmonary infection score is one of the techniques generally practiced, but may not be completely accurate or specific, and can cause overuse or inappropriate use of antibiotics. Treating a patient with high CPIS scores is costly and can lead to the development of antimicrobial resistant strains. Bronchoscopic BAL is another method used in clinical diagnosis, but it can be comparatively more aggressively invasive than other methods. In addition, the technique is usually expensive, time consuming, technically difficult and may lead to erroneous results in about 20 % of cases. Protected Specimen Brush (PSB) and tracheal aspiration are two other techniques used in clinical diagnosis but will n easy result in easy contamination of the sample.[14]

Successful treatment of patients with VAP is a difficult and complex undertaking.  Due to these factors, it is apparent that a simple, accurate clinical tool for the diagnosis of VAP is urgently needed. [8] Healthcare providers are therefore moving towards faster, reliable identification methods that deliver accurate and highly sensitive data with higher transparency.

Sequence based identification of 16s rRNA gene of pathogenic bacteria is a rapid,novel method that facilitate the fast identification of microbial pathogens causing ventilator- associated pneumonia. This test, known as  BactFast® is made available in Sri Lanka by Credence Genomics for the very first time. With the availability of BactFast®, the causative organisms can be identified faster, consequently accelerating the antimicrobial therapy. Deep knowledge on the presence of specific organisms with certainty narrows down the treatment scope, focusing on elimination of the causative organisms unlike in earlier techniques. [11]

BactFast is clearly a life saving approach due to its rapid turnaround time – it only requires a turnaround time of 48 hours. In contrast to conventional techniques such as plating, pathological or histological analysis which consist of time- consuming, cumbersome, error prone protocols  BactFast®, delivers safest, most accurate and sensitive results allowing faster identification of pathogenic  bacteria.  The technique is capable of identifying the entire spectrum of known pathogens present in a sample within a single run making BactFast® the only test of its kind.  In addition, the technique facilitates identification of intragenic variations among closely related species, while determining the relative abundance of each strain within the population. [11]

BactFast provides a vast range of opportunities to resolve a number of issues that burdens the healthcare system.  Early detection of the disease helps the physicians to identify the course of therapy before the infection worsens and continuous medication procedures can minimize the disease complexity. It also helps to minimize the cost spent on antibiotics and additional medical care while reducing the tendency of developing antibiotic resistant microbial strains that could affect the patient’s life in long term. Moreover, it greatly reduces the hospital stay while decreasing the tendency of administration of non- specific drugs that could adversely affect other underlying diseases, imposing life threatening situations. With the exact etiology of VAP being revealed with sequenced base 16s rRNA gene analysis, significantly effective disease preventive measures as well as increased sanitary conditions can be established at Intensive Care Units, in turn reducing the prevalence rate of this deadly hospital- acquired infection.

Fig- Differences in bacterial microbiota composition between community- acquired pneumonia (CAP), ventilator-associated pneumonia (VAP), non-ventilator ICU pneumonia (NV ICU-P), aspiration pneumonia (AP) and control subjects (CS) cohorts. Bacteria are shown according to their classes. Distribution of bacterial classes in each cohort is expressed as a percentage. Bacterial classes and their corresponding colours are indicated in the bottom right corner [11]

Fig- A graph illustrating the correlation between the time, disease burden and cost. Earliest molecular detection helps in early prediction of diseases, before the onset of clinical symptoms. [13]

Culture based identification requires a minimum turnaround time of 7-10 Days, which subsequently delays the antimicrobial therapy.

Patients can be administered with specific antimicrobial therapy.Delayed identification process can be life threatening for immune compromised patients.

Fast identification, Clearly a life saving approach.Results can be non-specific and error prone and may contain a specific degree of uncertainty.

Due to diagnosis challenges, the choice of initial therapy is entirely dependent on local knowledge and will vary from hospital to hospital, and

May often lead to overuse or misuse of antibiotics that helps in developing antibiotic resistant strains of bacteria.

No overuse or misuse of antibiotics. No drug abuse that may end up in adverse effects.Results in Prolonged hospital stays. Approximately increases the patient’s hospital stay by 7-9 days or more.

Reduces the cost of hospitalization by greatly cutting down the requirement of prolonged hospital stay.Increased cost on antibiotics and other relevant medical care.

Reduces the cost on antibiotics and medical care.Results in high rates of mortality and morbidity.

BactFast® is culture independent. Diagnosis is never affected by external factors.Number of organisms identified per test is always a limiting factor.

Can identify the entire spectrum of microorganisms in a single test. Unlimited test scope.Some clinical methods used in identification of VAP can be aggressively invasive.BactFast® is an entirely safe, non-invasive technique.